Lennart Purucker and Tobias Vente just started their Ph.D. a few months ago, and already won the Hackathon of this year’s AutoML Fall School together with their teammates of “Team 42” (Edward Bergman, Michael Fiegert, Elias Schede, and Gabriela Suchopárová).

The Hackathon was based on a Kaggle competition and held as part of the AutoML Fall School 2021. All twelve participating teams had two full days to find the most accurate model for classification given the provided dataset. Each team could use the AutoML libraries and concepts that were presented in the AutoML Fall School 2021 besides any other library that they were familiar with. Team 42 was able to build an ensemble of predictors and tune their hyperparameters to predict the classes more accurately than any other team.

Lennart Purucker and Tobias Vente are both new Ph.D. students at the Intelligent Systems Group in Siegen and used the chance to deepen and apply their knowledge of AutoML libraries in the competition. Besides Lennart and Tobias, also Eddie Bergman was part of Team 42. Eddie used to work at the Intelligent Systems Group. Now he works as a research engineer for Automated Machine Learning at the University of Freiburg with Prof. Frank Hutter.

The AutoML Fall School 2021 was a great event to discuss current research topics and to get in touch with people from the AutoML community. The week was full of discussions and hands-on sessions. Every attendee got the chance to improve their skills, learn about new AutoML tools and apply them in different scenarios with other people from the community. The AutoML Fall School 2021 was organized by Prof. Dr. Marius Lindauer (Leibniz Universität Hannover), Prof. Dr. Frank Hutter (University of Freiburg & Bosch Center for Artificial Intelligence), Prof. Dr. Bernd Bischl (Ludwig-Maximilians University Munich & Munich Center of Machine Learning), Dr. Janek Thomas (Ludwig-Maximilians University Munich), Katharina Eggensperger (University of Freiburg) and Matthias Feurer (University of Freiburg). 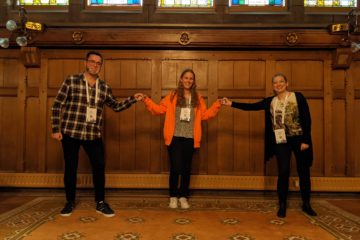 Our visiting student Teresa Scheidt received the best-paper award at the Perspectives Workshop at the ACM Recommender Systems Conference 2021 in Amsterdam. Teresa is doing her Master’s at Lund University in Sweden but visited us Read more…