The last version of Docear was released three month ago and you might wonder what we were doing. Well, I can tell you we were really busy. Besides working on some research papers for conferences in Indianapolis and on Malta (read here and here), we finally implemented two major milestones for Docear. These two milestones actually were the last ones we had on our road-map for releasing the final 1.0 version of Docear. And here it is, Docear 1.0 (RC 1) with:

We have completely redesigned the dialog that appears when Docear is first started. We believe it to be much more user friendly and intuitive. We also listened to those users who criticized that our terms of service had to be accepted even when no online services were activated. Now you have the choice. You can either use Docear as a registered user and enjoy the full potential including PDF metadata retrieval, online backup, online mind map viewer, and recommendations. Or you can use Docear as a local user with no data at all being submitted to Docear and no requirement for accepting any terms of service (just use Docear as you would use any other GPL desktop software). 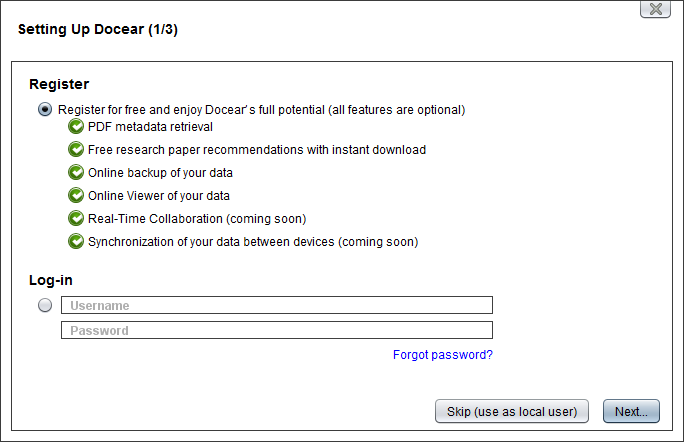 Several users were not particularly happy with what we called the “workspace” in Docear (the panel to the very left showing your mind maps and files). The new workspace concept of Docear is hopefully more intuitive. In the new workspace you can create several projects (see image to the left). All projects are completely independent from each other and each project has its own literature repository, incoming mind map, references, etc. That also means, when import your workspace from the ‘old’ Docear, the old workspace will be imported as a new project. The new concept has several advantages. First of all, it allows you managing multiple independent projects at the same time. Second, it is the prerequisite for a new feature we will be introducing soon. Soon you will be able to sync all your projects with our server,  other computers and work collaboratively on your data with colleagues. That includes a Dropbox-like client syncing your data between different computers and a web-interface allowing to work on mind maps collaboratively in real-time. We made also further small improvements to the workspace. For instance, you can have multiple literature repositories at the same time for one project. We also added a “My Files” folder that shows all folders and files in the root path of your project home directory. Finally, there is a global “download” folder. Whenever you receive recommendations and save them, they will be directly stored in the download folder. 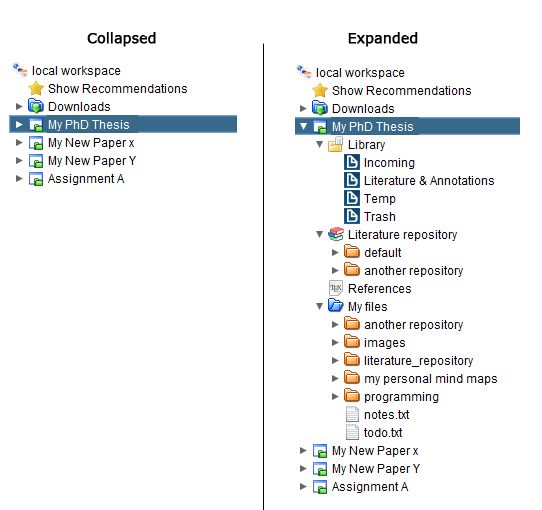 We removed the old-fashioned menu from Docear and replaced it with ribbons. We know, many users hate ribbons but we believe that in particular for beginners, but also for all others, they will make the work with Docear much more pleasant. With ribbons you have the most important functions (creating new nodes, folding, …) directly at your fingertips. And for the keyboard enthusiasts there is good news, too. You can completely hide the ribbons and have even more space than before.

Please note that the current ribbons are only a draft. We are currently thinking about which ribbons should appear in the home ribbon and which ribbons in general we want to have. We also have not added icons for all entries in the ribbons. This will follow in the next version. Feel free to post your comments and ideas, we are keen to hearing them! 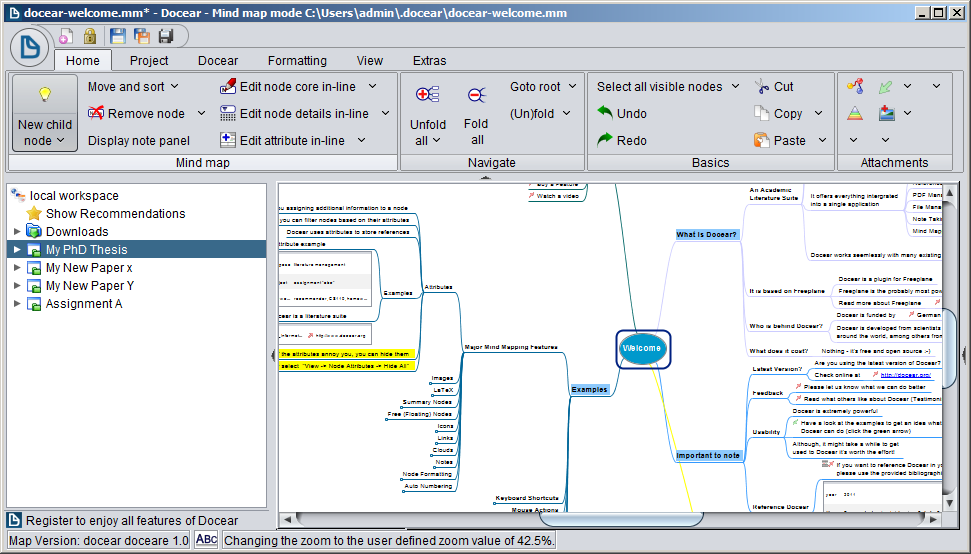 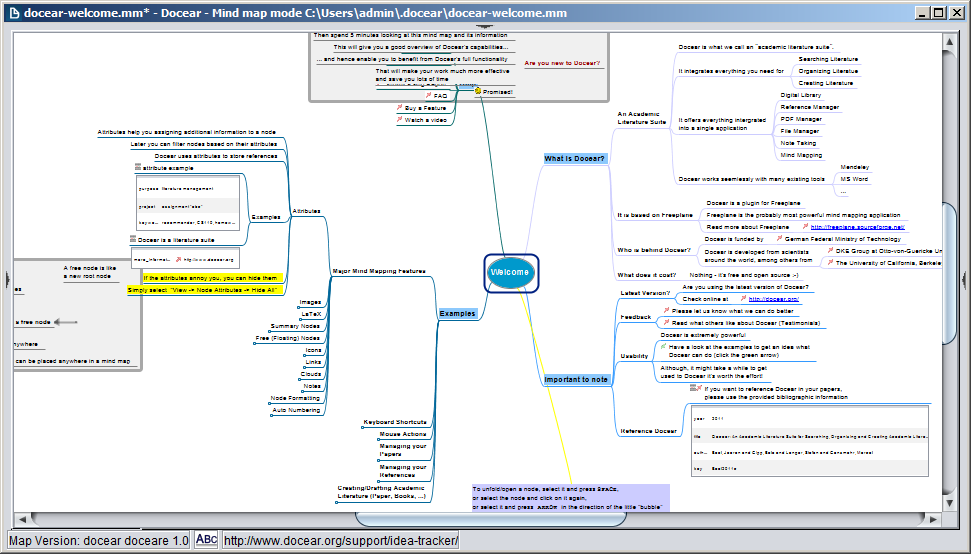 Please be aware that the current version is not fully tested and must be considered an experimental version. Feel free to try it, tell us what you think about it, but please make a backup of your data before you try Docear 1.0 RC1. As for the next couple of days we also won’t offer the RC1 as official download on the main page but only here in the Blog. But be assured that it will not take another three month before the next version of Docear will be released. We are working with full power on the RC2 containing further bug fixes and minor improvements and then probably the very final Docear 1.0 will be released including detailed tutorials and a manual that is worth the name ‘manual’ :-). Please note that you cannot use the new and old Docear in parallel because links in the mind maps are set differently.

All OS (all other operating systems supporting Java 1.6)

I solve the problem by trying to install program after rebooting the system. the new version is very interesting, now i try to work.

Thank you for your work! I wish for all of us happiness!
One question please: i try to launch the new version of program on my Mac OS for the first time, and find nothing: I see the logo of program, using the processor and memory in system monitor. Does it normal, that the program “think” during a long period of time at the first starting? Thank you for your program, that really doing me happy!

I have this tool installed a long time but never used it too much. Now I am really working with it and find it’s usefullness wondeful! Thanks!

One small thing:
If the mindmap nodes get really big (e.g. long file names as pdf files are scanned, lot’s of pdf files), the map viewport can not be extended to contain all nodes. This means, certain nodes can not be selected by mouse (“navigating” using the keypad arrows works, though). The scrollbars at the bottom and right of the map version show still room for scrolling but “jump back” once released. Also the mindmap’s image does not show correctly during scrolling if out of this invisible barrier. It is a bit annoying but I will try to keep my maps small for now. Probably this is just some bug, I don’t know.

Thanks for this tool and go on designing good software!

sorry but I cannot reproduce this problem. could you explain it in more detail? ideally in our bug forum http://www.docear.org/support/forums/docear-support-forums-group3/bug-reports-forum6/

Very very greet software!
I love mindmapping, I use Docear!
Thanks.

sorry, we missed this menu entry. it will be back in the next release.

at a first glance the release candidate looks very good. I really appreciate the new workspace concept and also the ribbon is a new good idea.
Now it would also be nice that all the projects of the old Docear versions would be imported each as a single project. Their not imported at all right now.

As an idea for the UI/ribbons: A quick access edit field with command suggestions as I know and like it from Eclipse.

Thanks for your work and keep it up (-:

I am glad that you like the new features.To import your old projects open the ribbon “project” and select “import” project. then select the root folder of your project.

thanks for your answer. With the new RC2 it seems to be solved anyway, i.e. I didn’t need to import my project.

Btw.: Is there a way that one can get a mail if someone answered on a comment?

Regards, back to Magdeburg (-;,