As you probably know, Docear is free and open source. As you might know as well, we do accept donations. Today, we would like to share some statistics with you about the amount of donations we received. Actually, in the past two years, we received 434 US$ (~340€) from from 33 donators. That’s not a lot, given that Docear has several thousands of active users. However, it’s also no surprise and to be honest, we ourselves hardly ever donate for other software tools, so we cannot blame anyone for not donating to Docear (even if he should heavily use it).

The average donation we received was 13.16$ (median was 10$), the highest donation was 50$, the smallest 1$, standard deviation 11.04$. The following chart shows the individual and cumulated donations. Sometimes, we don’t receive any recommendations for several month, sometimes we get multiple ones within a week or so. 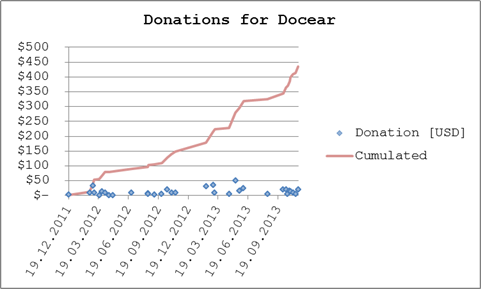